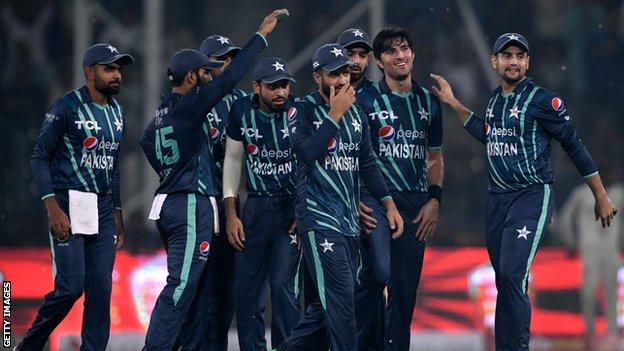 Pakistan took a 3-2 lead in their Twenty20 series against England with a six-run victory in a low-scoring match in Lahore.

Chasing just 146 for the win, England never recovered from a poor start in the powerplay that saw them reduced to 31-3 inside five overs.

A defiant knock from captain Moeen Ali, who ended unbeaten on 51, left England needing 15 runs off the last over, but some superb death bowling from debutant Aamir Jamal saw them fall just short on 139-7.

Earlier, England fast bowler Mark Wood took 3-20 as Pakistan were bowled out for 145 after 19 overs, Mohammad Rizwan the only batter to offer resistance with 63 from 46 deliveries.

The penultimate game of the seven-match series takes place on Friday, again in Lahore.

England's batting lets them down again

After failing to chase down 167 in Sunday's fourth T20, a poor start with the bat cost England again in a match they looked in control of at the halfway stage.

Pakistan's spinners - Nawaz, Shadab Khan and Iftikhar Ahmed - were superb in restricting England's scoring in the middle overs and ensuring they never got a grip of the run rate.

There was no boundary off the bat for 28 deliveries at one stage and, when Jamal removed Sam Curran with just his second ball in international cricket, England were 85-6.

Moeen's gritty knock, featuring two fours and four sixes, gave England hope, but he was left with too much to do.

The major plus point on an otherwise poor evening was the performance of Wood, who has taken 6-44 across his two matches as he continues his return from six months out with an elbow injury.

There was also a first international appearance since March for Warwickshire all-rounder Woakes, as England's injury problems continue to ease ahead of the T20 World Cup. 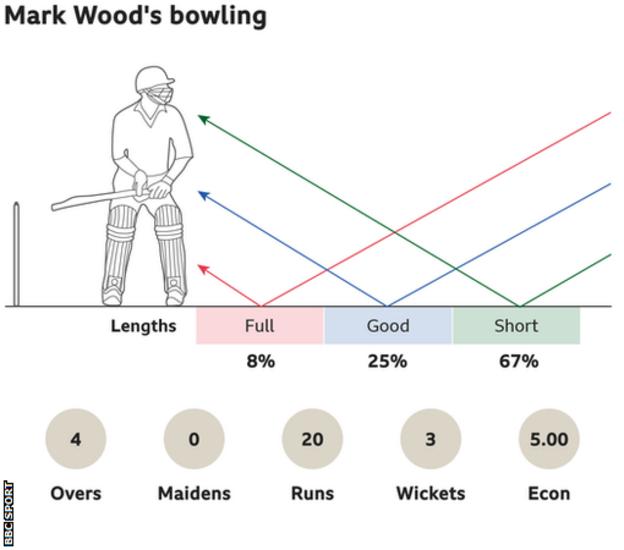 Like England, Pakistan's innings was littered with poor shots and muddled decision-making, with only three players reaching double figures.

They made a slow start too, going 23 balls without a boundary in the powerplay and limping to 63-3 at the halfway stage.

Yet Rizwan again stood out as he has done all series, reaching a half-century for the fourth time in five matches, though he was dropped on nine by Alex Hales.

And even he was ultimately guilty of a misjudged shot when he hit a leg-side full toss from Curran straight to Adil Rashid on the fine leg boundary.

The heavy dew in Lahore made bowling second difficult, but Babar Azam's side were able to defend a low total thanks to an all-round performance that saw all six bowlers pick up a wicket.

Iftikhar was the pick of the spinners, taking 1-16 from his four overs. Debutant Jamal only bowled two overs, but he took a wicket in one and showed great composure in the other to end on 1-13 and ensure England did not snatch victory. 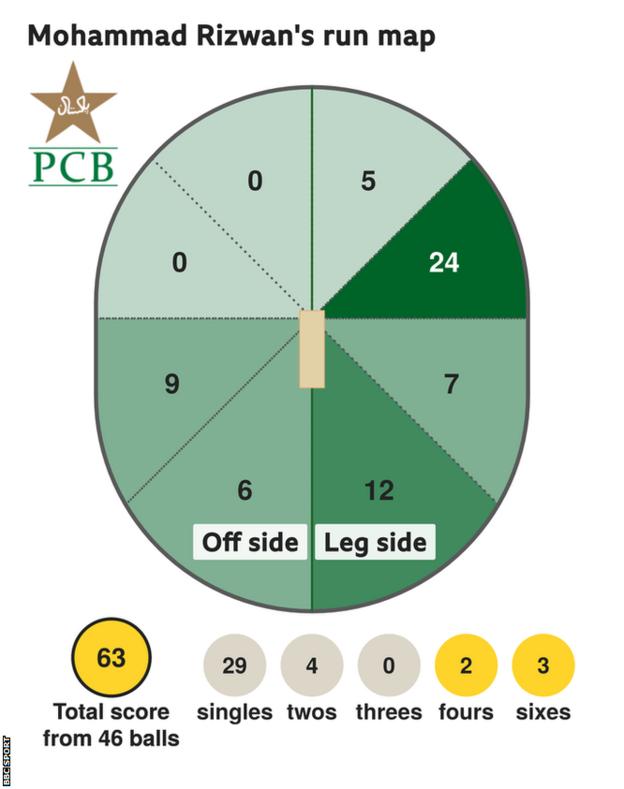 'We are a better team than that' - reaction

England captain Moeen Ali: "A very, very, good game. We're obviously disappointed we didn't chase the runs. We feel we are a better team than that. We got stranded with their spinners and couldn't get going.

"Mark Wood was amazing. On a slow wicket he bowled fast. He is massive for our team. He gets the big wickets. Someone with bit of pace can make batters do silly things."

Pakistan all-rounder Shadab Khan: "I am proud of my team for a complete team effort. We're honoured to welcome Aamir Jamal to international cricket.

"It is always tough to play against quality teams like England but we always believe in our ability. This win is for all the fans."